With much to prove in 2019, Odubel Herrera already working out in Florida

It is the middle of January here in Philadelphia, Pennsylvania. It was seasonably cold this morning as I took my little dog, Kiki, on her morning walk. The high is expected to possibly reach 40 degrees by later this afternoon.

Down in Clearwater, Florida, where the Philadelphia Phillies are scheduled to begin gathering approximately one month from now, the weather is a little bit better. The temps are in the low-50’s this morning, expected to rise to the upper-50’s by later this afternoon.
It is expected to be milder down in Florida than here in Philly at this time of year. But it isn’t quite what it will be down south when spring training opens and unfolds, when lows are generally around 60 degrees and the average high temps get well into the 70’s.
That’s why they call it “spring” training. The weather is mostly perfect for baseball in Florida in late February and March. But again, it’s mid-January. Those spring training days are still a month off.
And yet there was Odubel Herrera, running and throwing at the club’s Carpenter Complex in Clearwater on Tuesday morning.
Jim Peyton of FuturePhillies.com captured the Phillies outfielder as he worked out on a crisp January morning.
View image on Twitter 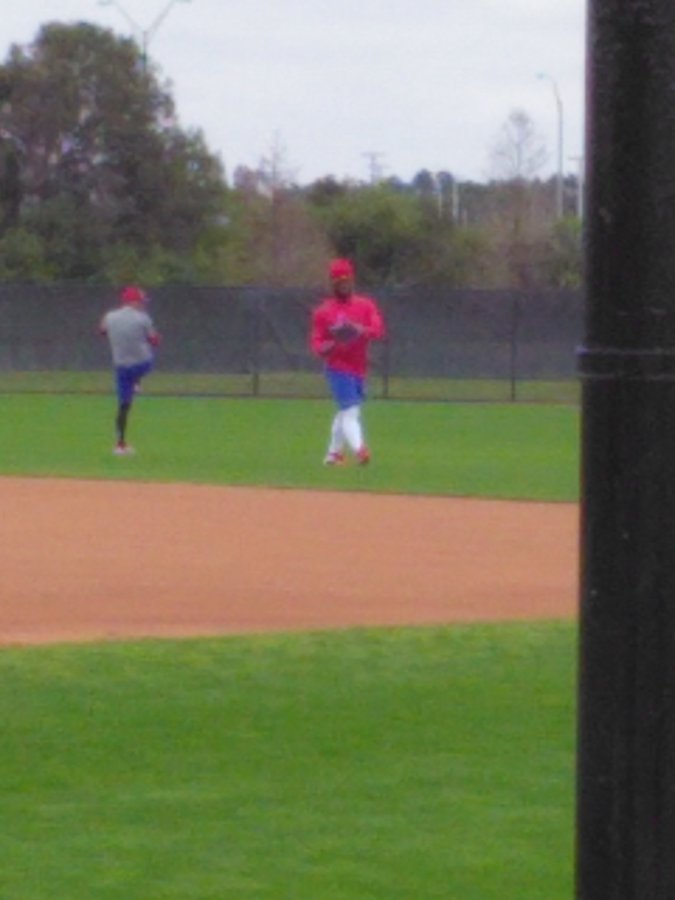 See jim peyton’s other Tweets
Twitter Ads info and privacy
There is good reason for Herrera to be down in Florida early working out in the team facilities. The 27-year-old has much to prove this spring, assuming he is still with the ball club.
Back in mid-December of 2016 the Phillies signed Herrera to a five-year extension at $30.5 million. The deal keeps him under contract through the 2021 season. It also includes club options for $11.5 million in 2022 and $12.5 million in 2023.
At that point he was coming off an age-26 season in which he hit .286 with a .361 on-base percentage. He struck 15 home runs, scored 87 runs, and stole 25 bases and was the Phillies representative on the National League All-Star team.
The Phillies thought they had gotten a steal when they selected him in the December 2014 Rule 5 Draft after the Texas Rangers had left him unprotected. The club was plotting their future and got him to agree to what appeared to be a team-friendly extension.
In 2017, Herrera suddenly seemed to become less aggressive. His stolen base total plummeted to just eight total bags swiped, and his runs scored total dropped to 67. However, he also powered up. His homers dropped by one from the prior season to 14, but that was in 93 fewer plate appearances. He banged out 59 extra-base hits as opposed to just 42 in 2016.
With Texas, Herrera had been a second baseman. But his winter ball manager, Jorge Velandia, also happened to be a Phillies special assistant of player personnel at the time. He saw Herrera’s outfield potential and recommended him to pro scouting director Mike Ondo.
At the time of the extension, Todd Zolecki of MLB.com quoted Ondo on that potential as an outfielder having been of primary interest to the Phillies:
“I’ll be honest, we liked the player, but a lot had to do with the outfield and knowing the person, knowing what you were getting in the player. That was a huge assist. We were real fortunate that Jorge was there to give us that information.”
Herrera was a colorful addition to what was increasingly becoming a bad and bland Phillies ball club. He made a number of mistakes as he basically tried to learn how to play center field at the big-league level.
He made five errors in the 2015 season and misplayed a number of other balls. The following year his defensive challenges increased. He made 11 errors in the field and the misplays continued to come far too frequently. Incredibly, Herrera was nominated for a Gold Glove Award following that 2016 season, one in which his performance tailed off considerably in the second half.
At that point, Phillies general manager Matt Klentak, per a quote from Matt Breen at Philly.com, called Herrera “…one of the best centerfielders — one of the best overall outfielders — in the National League, period.”
Phillies fans were not as sold on Herrera’s skills. On sports talk radio and social media, Herrera was often decried as a player who didn’t always appear to take the game seriously. The most commonly used word to describe him was “bone-headed” by those fans, based on the numerous mistakes that he continued to make in the field.
In 2018, Herrera fell off offensively and continued to suffer from defensive lapses. His slash line dropped to .255/.310/.420, and though his home run and RBI totals both increased, his doubles total dropped by more than half and his stolen base and runs scored totals both dropped again despite an increase in plate appearances.
As the Phillies arrive at spring training over the next month, Herrera will find increased competition for playing time. Andrew McCutchen has been signed as the new left fielder. There now appears to be a strong possibility that Bryce Harper could be coming as the new right fielder.
Herrera may now find himself competing for the starting center field job with 25-year-old Roman Quinn. There is also the presence of returnees Nick Williams and Aaron Altherr to consider. At least one and possibly two from among that four-player group would likely become trade bait should Harper actually sign.
Now four seasons in, I’m frankly still not exactly sure what the Phillies have in Herrera. At his best, he flashes the skills to be an above-average ball player. At other times the fans who call him “bone-headed” are exactly right in their description. At worst, the Phillies have a depth outfielder on an affordable contract for three more years. At age 27, this will be a pivotal season for him.
If Herrera is still here when spring training gets underway, and he begins as the starting center fielder flanked by McCutchen and Harper, then hopefully the focus and determination of those former National League MVP’s will help Herrera to not only rebound but elevate his game. By arriving a month early, he seems to be showing that he knows he has something to prove.
Originally published at Phillies Nation as “Odubel Herrera has something to prove and appears to know it“