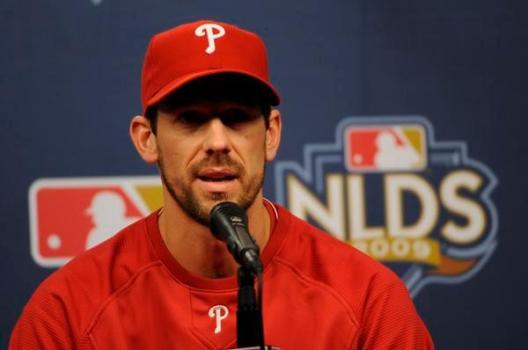 During what all fans of the Philadelphia Phillies have been led to believe will be one of the most significant off-season periods ever for the franchise, I’ve been taking a look back at the team’s ‘Hot Stove’ history.

So far we have recalled the signings of Pete Rose (1978), Jose Mesa(2000), and Jim Thome (2002) in free agency. We have also revisited key off-season trades: the 1981 three-way deal that resulted in Lonnie Smith leaving and Bo Diaz arriving, the 1982 trade of future Hall of Famer Ryne Sandberg, and the trading away of Thome.
Probably the most recent important Phillies move during a Hot Stove season came in the middle of December back in 2010. It was then that general manager Ruben Amaro Jr. began trying to reverse a huge prior mistake from exactly one year earlier. Both decisions were among the most influential during the 2009-11 period when the club was trying to get back to the World Series.
Those two moves involved a left-handed starting pitcher named Cliff Lee. His pro career had begun after he was drafted three times. Lee finally signed after being selected by the Montreal Expos with their fourth round selection in the 2000 MLB Amateur Draft.
In June 2002, Lee was dealt to the Cleveland Indians as part of a four-prospect package that also included Grady Sizemore and Brandon Phillips in an overall six-player deal that brought starting pitcher Bartolo Colon to Montreal.

LEE DEVELOPS INTO AN ACE

In Cleveland’s minor league system, Lee showed enough with Buffalo of the Triple-A International League that he was given a two-start cup of coffee with the Indians in September 2002. He went 10.1 innings allowing just six hits over those two outings.
After beginning the 2003 season back at Triple-A, Lee received a spot start with Cleveland in late June. Then in mid-August he was called to the big-leagues for good. Lee would enter the Tribe’s starting rotation and remain there for the next six years.
Lee would develop into one of the top starting pitchers in the game, culminating in a memorable 2008 season. While the Phillies were driving towards their first World Series crown in nearly three decades, Lee was putting together a Cy Young Award-winning season in Cleveland.
In that 2008 campaign, Lee went 22-3 with a 2.54 ERA and 1.110 WHIP. He also had a fabulous 170/34 K:BB ratio over 223.1 innings across 31 starts. In addition to the Cy Young honors, he was an AL All-Star for the first time, and even received AL MVP votes.
Lee was scheduled to become a free agent after the 2010 season, and it became obvious that the Indians would not be able to get him to sign a contract extension. Looking at a rebuilding situation, Cleveland GM Mark Shapiro decided to find a deal for him a year early.

As defending World Series champions, the Phillies were struggling to open up a lead in a tight NL East race in July 2009. A big reason was that the team’s starting pitching was looking a bit fragile.

Cole Hamels, the hero of the prior season, appeared to be going through a World Series hangover campaign. Brett Myers struggled the entire year with injuries. At age 46, Jamie Moyer was getting hit hard. Joe Blanton and rookie J.A. Happ were giving the club innings, but were not the kind of arms that a team looking to repeat as world champions wanted at the front of a rotation.
On July 15, the Phillies signed 37-year-old veteran Pedro Martinez, who had been sitting out the season to that point. It was going to take Martinez a few weeks to get into pitching shape, and in fact he would not join the team’s starting rotation until August 12.
Amaro was still rumored to be hot after both Lee and Toronto Blue Jays right-hander Roy Halladay. Finally, just before the non-waiver trade deadline, Amaro and Shapiro reached a deal. The Phillies would acquire Lee in exchange for a four-prospect package led by pitcher Carlos Carrasco.
Cito Gaston was manager of the Blue Jays at the time. Once the Phillies had traded for Lee, it meant that Gaston was likely to keep his ace in Halladay. Jayson Stark at ESPN quoted Gaston after the Lee deal was announced: “Who knows? They may come back and get [Halladay], too. That’d be a pretty good staff there, wouldn’t it?” How prescient that comment would eventually prove.
The 30-year-old Lee was everything that the Phillies hoped, and more. Over a dozen starts he went 7-4 with a 74/10 K:BB ratio. Martinez went 5-1 over nine starts with a 37/8 K:BB ratio. The two veterans gave the rotation just the shot in the arm that it needed to push the club to its third straight NL East title.
In the 2009 postseason, Lee upped his game. He made two strong starts in a tough NLDS victory over the Colorado Rockies, then a brilliant start against the Los Angeles Dodgers in Game Three of the NLCS.
When Lee shut down the New York Yankees in Game One of the World Series, the Phillies appeared on their way to back-to-back championships. Alas, it was not to be. The team did win his next start in Game Five, but that only kept them alive. The Yanks would take the Fall Classic two nights later.

After the season, Amaro resumed his pursuit of Halladay, who was scheduled to become a free agent following the 2010 season. On December 16, 2009 the Phillies acquired Halladay from Toronto in exchange for a three-prospect package.
Amaro had negotiated a four-year contract extension with the 32-year-old Halladay, who thought that he was joining Lee in the Phillies rotation. Instead, Amaro shocked everyone in the Phillies community by dealing away Lee just hours later.
The justification given by Amaro at the time was shaky from the start. He felt that Lee’s contract demands were unreasonable, and also claimed that the Phillies needed to re-stock their farm system after it had been depleted by that summer’s Lee trade and the Halladay aquistion.
However, the package that Amaro obtained from the Seattle Mariners that day of prospect pitchers Phillippe Aumontand J.C. Ramirez and young outfielder Tyson Gillies failed to convince anyone that it improved the organization to the same level as having Lee remain on the big-league pitching staff.
It would prove to be one of the worst trades in Phillies history. Our own Tim Kelly here at PN wrote in August 2018 about comments made by former outfielder Jayson Werth to a local radio station. Included among those revealing remarks were this quote:
“…they [the Phillies] offered Cliff a contract at a marginal number, we’ll say. And then he counters at a reasonable counter, far less for what he ends up signing back for. Within that day, a day or two, Ruben freaks out, he can’t believe that they would ask for that type of money – which was under-market for Cliff – and trades him to Seattle. So he was traded to Seattle for a bag of balls and a couple Fungos.”
Halladay would enjoy a memorable 2010 season in which he would capture the National League Cy Young Award while tossing a Perfect Game and a playoff no-hitter. Hamels rebounded with a solid campaign. The rest of the rotation struggled, but Amaro swung a trade to bring in three-time NL All-Star and perennial Cy Young candidate Roy Oswalt from Houston.
The Phillies struggled much of that summer. But then from late August through late September the team went on an incredible run, winning 23 of 27 games to pull away to a fourth straight NL East title.
As for Lee, he would make just 13 starts for the Mariners. With the club struggling and with Lee still scheduled to become a free agent in the coming off-season he was shipped off to the Texas Rangers following a final start for Seattle on July 4.
At the time of that deal, Lee was 8-3 with a 2.34 ERA and had been selected to the AL All-Star team. He would attend the game not as a member of the Mariners, but instead wearing a Rangers cap.
Over the rest of the season in Texas, Lee would go just 4-6 with a 3.98 ERA. He did produce solid numbers otherwise, allowing 103 hits over 108.2 innings with a 96/12 K:BB ratio in 15 starts.
The Rangers won the AL West crown and the American League pennant, reaching the World Series. However, the Phillies were not there to great their former pitcher. Halladay, Werth, and the two-time defending NL champion Phillies had been beaten in six games in the 2010 NLCS by the San Francisco Giants.
San Francisco would then take out the Rangers in five games to capture the first World Series crown for the Giants franchise in 56 years. Lee was rocked in the opener of that Fall Classic in San Francisco. He then would also lose a pitcher’s duel to Tim Lincecum in the Game Five clincher at Texas.