Also inducted into the Baseball Hall of Fame are five more superstars: Vladimir Guerrero, Trevor Hoffman, Chipper Jones, Jack Morris, and Alan Trammell.
Even though Thome played just four of his 22 big league seasons with the Phillies, his impact on the organization was considered so great that he has previously been enshrined on the club’s Wall of Fame.
Last summer, Thome joined Mike Lieberthal (2012) as the only players enshrined on the Phillies Wall of Fame who appeared in a majority of their seasons with the club during the 2000’s but who had not played with the 2008 World Series team.
Thome signed with the Phillies as a free agent following the 2002 campaign. By that time, he had become one of the most feared sluggers in the game. As a member of the Cleveland Indians, Thome had been a three-time American League all-star, a Silver Slugger winner, and a perennial MVP candidate.
The Phillies team that Thome was joining for the 2003 season was not dissimilar to the current 2018 team. After years of losing, the Phillies had spent a few seasons rebuilding and retooling their roster.
Thome was signed to become the new Phillies first baseman and help the team step up to contending status. He was also brought in to provide a drawing card as Veteran’s Stadium closed in 2003 and Citizens Bank Park opened in 2004.
In his first season, the team’s final year after 33 seasons at The Vet, Thome led the National League with 47 home runs. He finished fourth in the NL MVP vote that year for a Phillies team that led the NL Wildcard race before collapsing to lose seven of their last eight games.
The following year, Thome made the National League all-star team for what would be the lone time in his career. He banged another 42 home runs that season, finishing among the top 20 in NL MVP voting. Among the many highlights were the 400th home run of his career, which he banged in front of the home fans in South Philly.
He would be honored following that 2004 season with the Lou Gehrig Memorial Award given to a player who best exemplifies strong character both on and off the field.
That Phillies team turned it on down the stretch this time, finishing the season with a 21-8 record after September 1. But again, it wasn’t enough to land a playoff berth.
His third season with the Phillies would prove to be abbreviated. It would also lead directly to a change that would have reverberations for the Phillies ultimate fortunes, and for the rest of his own career.
Embed from Getty Images

In that 2005 campaign, Thome suffered a pair of injuries. He was driven to the disabled list first by a lower back strain, and then again by a bout with elbow tendinitis. Meanwhile, a 25-year-old first baseman named Ryan Howard was blasting moon shots in the minor leagues and pushing for playing time.
Thome would play his final game of the 2005 season on June 30. It would be his final game with the Phillies as well. At least for the next seven years.
As Thome finished up the end of his three-year, $36 million-dollar contract with three months on the disabled list, Howard stepped into the starting lineup.
The young slugger immediately became a star, bashing 22 home runs, 21 of those after Thome’s season was finished. Howard captured the NL Rookie of the Year honors, beginning a magnificent career in Philly during which he became “The Big Piece” and helped lead the 2008 team to their World Series championship.
Thome signed as a free agent with the Chicago White Sox. He would bounce back strong, blasting 42 home runs in 2006 with the Chisox and becoming an AL all-star. He would play in parts of four seasons with Chicago before being traded to the Los Angeles Dodgers at age 38 in 2009.
With Los Angeles in 2009, Thome would once again see his career intersect with the Phillies, this time as a postseason opponent. He actually received a pair of plate appearances as the Dodgers and Phillies battled in the 2009 National League Championship Series.
Thome drew a walk off J.A. Happ in the bottom of the sixth inning of a Phillies 8-6 victory in the NLCS Game One. He would be immediately replaced by a pinch-runner who also had previous Phillies ties, pitcher Randy Wolf.
In Game Two, a 2-1 comeback victory for Los Angeles, Thome rapped a pinch-hit single off Scott Eyre. He was again removed for a pinch-runner. But that hit came in the midst of a two-run Dodgers rally that gave them the victory and tied the series.
Thome would then play for five different organizations over his final four seasons, including returns to both the Indians and Phillies.
He would slam five final homers in a Phillies uniform over 71 plate appearances during the first few months of the disappointing 2012 campaign. That season would prove to be the swan song for a long era of winning baseball at Citizens Bank Park.
As the team floundered, the 41-year-old Thome was dealt to the Baltimore Orioles on June 30, 2012 for a pair of nondescript minor league prospects. He would retire after finishing up that season in Baltimore.
Over part of four seasons in red pinstripes, Thome recorded a .260/.384/.541 slash line. He blasted 101 home runs, banged 42 doubles, knocked in 281 runs, and scored 243 times. 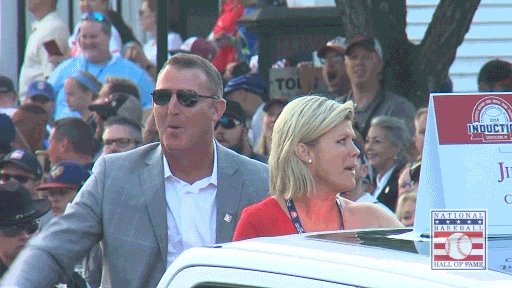 Today’s a special day for a very special guy.

Congratulations to Jim Thome on his induction into the @baseballhall today! #HOFWKND

Twitter Ads info and privacy
For his full 22-year career, Thome blasted 612 home runs. That places him eighth on the all-time Major League Baseball home run leader board. He finished up with 1,699 RBI and 1,583 runs scored. Thome also walked 1,747 times in his career.
Though his time in Philadelphia was relatively brief, it was also undoubtedly memorable and influential. He helped the organization in the early-mid 2000’s emerge from a decade of losing and ushered in an exciting new era of winning baseball at a beautiful new ballpark. Today, Thome takes his rightful place among the most memorable players in the history of the game.
Originally published at Phillies Nation as “Jim Thome inducted into the Baseball Hall of Fame“