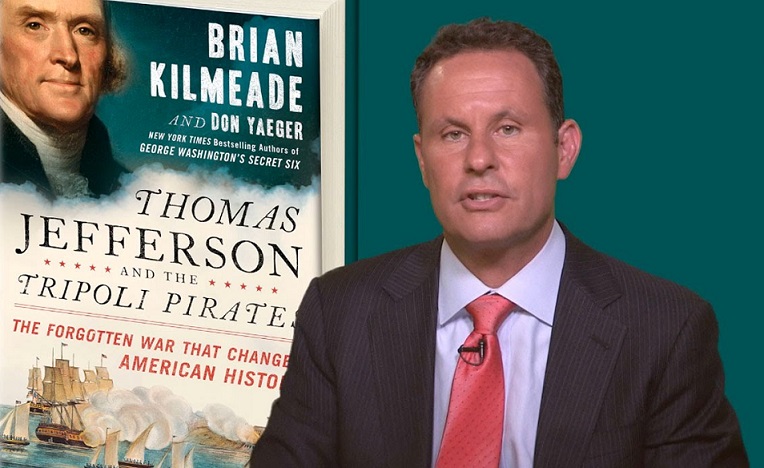 Thomas Jefferson and the Tripoli Pirates

I recently returned to my first love in reading topics: history and biography. While fiction can be extremely enjoyable, especially when done well, I have always found the true, non-fiction stories of real people and events much more interesting.

That return to true history results here in my latest book review. For the first time in nearly four years, it does not involve the topic of baseball.
“Thomas Jefferson and the Tripoli Pirates” was published in 2015 by Penguin Random House’s ‘Sentinel’ imprint.
This joint effort of Fox News host Brian Kilmeade and author Don Yeager tells the story of “the forgotten war that changed American history.“
That war is what many students of U.S. history know as the ‘First Barbary War‘, which, as the book jacket explains, “is the little known story of how a newly independent nation was challenged by four Muslim powers and what happened when America’s third president decided to stand up to intimidation.“
America’s first four Presidents played key roles in the events leading up to and during the conflict. But George Washington, John Adams, Thomas Jefferson, and James Madison are largely secondary figures to the real military and diplomatic heroes and villains who took part in the action.
Following the War for Independence, the newly formed United States of America was saddled with enormous debt and had largely disbanded its military. This was particularly true in the area of naval force.
America was protected from more established world powers of that time primarily by distance and trade agreements. It had little or no influence on the high seas.
In trying to further those trade efforts, American merchant ships would frequently come under attack in the Mediterranean Sea by the Muslim powers of North Africa. These ‘Barbary States’ nations practiced state-supported piracy in order to exact tribute from weaker Atlantic powers.
American ships would be raided, and their goods stolen by Muslim crews. At times, the ships and their crews would be taken and held hostage for large ransoms.
The fledgling United States had no response other than to pay those ransoms. But this only further added to the national debt. Also, the problem wasn’t being dealt with in any meaningful way. It just kept happening, with no end in sight.
The United States wasn’t the only nation facing these issues. Wealthier countries with an actual naval presence in the region simply paid tribute to the Muslim leaders in order to ensure free passage of their ships.
Adams, a Federalist, and Jefferson, a Democratic-Republican, were political adversaries. Those differences extended to their views on dealing with the Barbary powers.
The second President of the United States, Adams thought it possible to continue to buy peace, as was done by other nations. Jefferson, America’s third President, wanted to end that system permanently. He preferred a strong military response.
As Kilmeade and Yeager write:
“In response to events on the Barbary Coast, Jefferson, in 1801, had dispatched a small U.S. Navy squadron to the Mediterranean. For the next four years, he responded to circumstances, expanding the fleet to a much larger naval presence. In the end, thanks to the bold leadership of men like Edward Preble, James and Stephen Decatur, and William Eaton, and Presley Neville O’Bannon, military force had helped regain national honor. Even the Federalists, who liked little that Jefferson did, came to accept that the United States needed to play a military role in overseas affairs.“
The book is the story of those men: Preble, the Decatur’s, Eaton, and O’Bannon and many more as they battled on land and sea to help a new nation stand up for itself on the world stage.
The United States Marine Corps played a key role in the ultimate victory. This was the war from which came the USMC hymn line “From the Halls of Montezuma to the Shores of Tripoli, we fight our country’s battles in the air, on land and sea.”

As the authors state, this war against radical Muslim powers was one which we still, in many ways, are fighting today. It is a pivotal story of the immediate post-Revolutionary War, post-U.S. Constitution period. It is a story that all Americans should know.
Kilmeade and Yeager tell that story in just over 200 easy to read pages chock full of historic drama. Their book includes maps, notes, and a complete rundown of the cast of characters involved in that drama. It will make an enjoyable and educational read for any fan of history, especially of American history.