The Philadelphia Phillies have cancelled their planned honoring of former star player Pete Rose with a place on the team’s Wall of Fame.
Rose will also no longer participate in activities surrounding the team’s upcoming Alumni Weekend from August 11-14.
The cancellation has nothing to do with past controversies surrounding Rose’s gambling problems. Those well publicized issues got him suspended by Major League Baseball, and have kept him from the Baseball Hall of Fame.
Instead, Rose will not be honored by the Phillies – at least not at this time – due to allegations of possible statutory rape and possible pedophilia. The alleged incidents were committed four decades ago during his playing career.
These new and scandalous allegations emerged on Monday from court documents filed as part of a law suit. Rose filed the suit a year ago against John Dowd, an attorney who authored the primary document which resulted in Rose’s banishment from baseball in 1989.
As part of Dowd’s defense against the lawsuit, a sworn statement was given by a woman. Described only as “Jane Doe”, she claims to have engaged in a sexual relationship with Rose. This occurred during the 1970’s, and allegedly began before she had turned age 16.
Rose, who played with the Cincinnati Reds and was married with two children at the time, does not dispute the relationship. Instead, he claims that he believed that the girl was 16 years old at the time.

The woman’s statement has relevance in that Rose was suing Dowd because of statements the attorney had made to a radio station back in 2015. As reported by William Weinbaum with ESPN, those statements linked Rose to the pursuit of young teenage girls during his playing days.

“Michael Bertolini told us, you know, he not only ran bets, but ran young girls down at spring training, ages 12 to 14. Isn’t that lovely? So that’s statutory rape every time you do that.” ~ John Dowd

Rose vehemently denied those allegations, and filed the suit. But with the sworn statement from the Ohio woman, there is now testimony to support the possibility of pedophile activity. Even if the Ohio woman is the only truthful incident, it remains troubling.
Morality aside, the difference would matter from a legal perspective at that time. Ohio law put the age of consent at 16 years. The woman claims that the sexual activity continued for years, and also occurred outside Ohio. If it happened during spring training in Florida, the age of consent there was 18 years. Rose does not face any possible criminal repercussions due to the expiration of the statute of limitations.
Also per Weinbaum, one of Rose’s attorneys, Ray Genco, responded to the allegations as follows:

“John Dowd purposely made a defamatory statement that damaged Pete — serial pedophilia consisting of the statutory rape of 12- to 14-year-olds during spring training. It is also false…His litigation strategy is to further drag Pete’s name through the mud. It’s a witch hunt — and won’t be a successful litigation strategy.”

Whether it turns out to be a “witch hunt” or not, from the Phillies perspective the sudden emergence of these allegations came at a difficult time.

Rose was chosen by the fans in voting back in the winter as a finalist for the 2017 Phillies Wall of Fame honors. An expert panel then selected him from a small group of finalists to receive the Phillies organization nod to franchise immortality.
The team just began a 10-game road trip, with the festivities set to take place upon their return to Philadelphia the weekend after next.
View image on Twitter 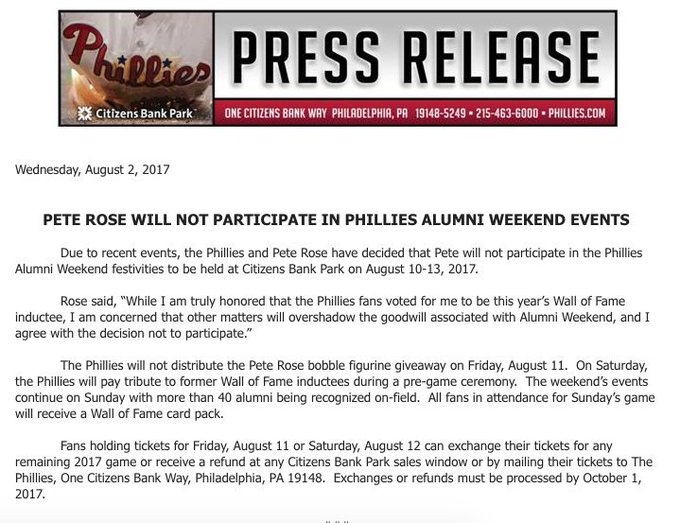 @MatthewVeasey
.@Phillies have cancelled induction of @PeteRose_14 to their Wall of Fame, and his involvement in Alumni weekend. #Phillies#PhilliesTalk

Speaking from a purely personal standpoint, this is extremely disappointing and frustrating. My emotions come from a mixture of lifelong Phillies fan, longtime Rose fan and supporter, longtime law enforcement professional, and father and grandfather of young women.
I was a South Philly resident, Philly born and raised, and a 17-year old high school senior when the Phillies made Rose their first-ever big-ticket free agent signing back in December of 1978.
I had been a fan of the team since Veteran’s Stadium opened in 1971 when I was nine years old, and watched excitedly as the club became a legitimate contender in the mid-late 1970’s.
The signing of Rose signaled that the Phillies were willing to do whatever it took to get over the hump and finally win a world championship. At the time of the Rose signing, the Phillies had existed for 96 seasons without winning a title.
In 1980, thanks largely to the contributions that Rose brought to the team on the field and in the clubhouse, the Phillies did finally win the World Series.
Over five seasons in Philadelphia from ages 38-42, Rose would make the NL All-Star team four times, win a Silver Slugger Award, and finish Top 15 in NL MVP voting twice. The Phillies won a pair of National League pennants, and that 1980 championship.
His and the team’s performances cemented the lifelong affection of fans such as myself. Even after his gambling on baseball was revealed and his suspension from the game by then Commissioner A. Bartlett “Bart” Giamatti came about, many of us stood by him.

Clearly on playing performance along, Rose is one of the all-time greats of the sport. He is baseball’s all-time ‘Hit King’ with 4,256 hits over his 24-year career and finished with a lifetime .303 batting average
Rose was the 1963 NL Rookie of the Year and the 1973 NL Most Valuable Player. He won the 1976 Roberto Clemente Award for his work in the community. Rose was MVP of the unforgettable 1975 World Series that might be the greatest of all-time. He won three batting titles, and was a 17x all-star.
His career playing resume is that of a slam-dunk first ballot Baseball Hall of Famer.
But the gambling allegations, evidence, and mutual agreement led to his suspension. They also scuttled the possibility of his enshrinement with other immortals of the game at Cooperstown.
Now these new allegations which amount to statutory rape and pedophilia will likely keep him from ever becoming officially recognized as a Phillies immortal.
The fact of the matter is that ‘Charlie Hustle’ has been his own worst enemy. Over the course of his unforgettable playing and managerial career, he made choices that have led to his current situation.
Those of us who loved the player and were joyous at the championship he brought will never forget those things. But we simply cannot continue to stand by him. It is in many ways frustrating and disappointing. It is sad. And it is no one’s fault but his own.