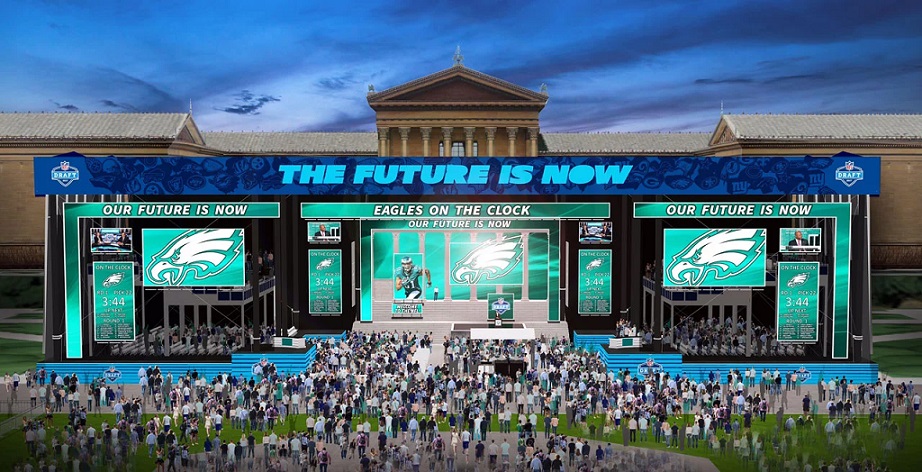 My Experience at the 2017 NFL Draft in Philadelphia

To say that the 2017 NFL Draft, held in my hometown of Philadelphia over the last three days, was a major success would be an understatement.

I got to experience this signature event of the National Football League up close and in person as a Sergeant with the Philadelphia Police Department. It was just the latest in a number of high profile events that I’ve had the pleasure to enjoy while on-duty during my career.

Assigned to take charge of a group of police officers, we spent both days on the south side of the 2400 block of the Benjamin Franklin Parkway.

It was a slight surprise to me when my group actually took that position and found that we were at the very front lines of the stage and seating arena area. It turned out to be an exciting and rewarding assignment.

The crowd was massive, but Philly-friendly and cooperative. As far as their interactions with myself and my officers, I couldn’t have asked for a more positive reception. Everyone was friendly to us and appreciative of our efforts, and quite a few let us know that fact.

One thing that none of us knew, from the top brass on down to rookie police officers, was exactly what kind of crowd we would be met with. It was the first time that the NFL had put on their annual Draft of college players in that big of a show.

Philly can be notorious at times for our fan reactions, especially where Eagles fans are concerned. You also had to add in the factor that this was a free event. Would the crowd turn surly at any point? Sometimes it only takes a few bad apples to spoil things for the whole bunch. If any officials held any concerns of a worst-case scenario, those never materialized. In fact, just the opposite.

Even when faced with moments involving the hated, rival Dallas Cowboys, New York Giants, or Washington Redskins, the Philly faithful responded with spirited but controlled reactions.

The biggest target of the ‘Boo Birds’ over the first couple of days was easily the Commissioner of the NFL, Roger Goodell. Yet even with the Commish, I witnessed first-hand a somewhat different reaction from the crowds.

On Thursday, before the actual player selection process got underway, Goodell came out and greeted fans along the very front of the crowd at the sturdy barricades which separated the street from the arena section. As he emerged, there were boisterous boos.

Goodell approached and then walked down the entirety of that front line. He reached across the barricades to shake hands, fist-bump, and even take selfies with those in front, all of whom looked star-struck. The crowd returned his outreach with smiles and handshakes. There were no boos at that point.

As the Commissioner made his way back towards the actual arena, he walked straight at me and shook my hand. I took the opportunity to ask if he minded a quick photo, and in a friendly tone he responded: “For you? Absolutely!” He then thanked me for the work we were doing. Great stuff!

As all cops do, I’ve worked many of these high profile details over the years. I’ve been within interaction distance of numerous famous folks including U.S. President Bill Clinton, British Prime Minister Tony Blair, and South African President Nelson Mandela. I certainly could have tried to insinuate myself with any of them at some point, but always held off.

I’ve gotten to shake hands and exchange quick pleasantries with folks such as Flyers legend Bernie Parent and numerous other musicians, athletes, politicians, and celebrities. Goodell was the first time that I asked for a photo. Strange choice, no?

As the time came for the Draft ceremonies to begin, the event was kicked off with a beautiful rendition of our National Anthem, “The Star-Spangled Banner“, by Chloe and Hallie Bailey.

Standing at attention, facing the stage and flag, I threw up the customary respectful salute. As I held my salute through the anthem and the girls wound towards the end, two cameramen suddenly charged me. Next thing I knew, there I was, flashing a salute (1:39 into below video) on national television for the NFL Network audience.

As the Draft itself unfolded, the crowd grew massive at the front of the stage area. They roared with approval whenever a local favorite such as Ron ‘Jaws’ Jaworski appeared, and booed lustily when some rival legend showed up. The best was former Cowboys wide receiver Drew Pearson, whose boisterous pro-Dallas rant was met by an equally vibrant reaction from Birds’ fans.

Early on Thursday, prior to starting my work assignment, I had visited the 2100 block of the Parkway. There I got to view some of the other attractions which I would end up missing while working up at the arena area.

I also ran into my cousin, Philly police officer Bob Veasey, who was working the daywork shift in that 2100 block of the Parkway. Bob told me that he had a great day, even getting a picture with the Vince Lombardi Trophy awarded to the Super Bowl winners.

Philadelphia looked fantastic. The mid-spring green colors in the trees were highlighted by unseasonably warm temperatures. It was as though three early-summer days had decided to invade the springtime, and it couldn’t have happened at a better time for the city.

A chilly rain had fallen for days prior to the start of the NFL Draft. With the event over now, Sunday is cloudy with a chance of rain. So it turned out that even Mother Nature was on Philadelphia’s side this week.

The Parkway itself was fully decorated in NFL Draft paraphernalia. Numerous tents and attractions drew fan participation and photo opportunities.

There was plenty of opportunity to purchase food and beverages. If you bought a bottle of water, you could refill it for free at a handful of kiosks scattered around the event. Porta Potty’s were aplenty.

From a concession stand set up next to the famed “Rocky” statue, I got to enjoy a delicious hot sausage on day one, a jumbo hotdog on day two, both washed down by a nice, cold bottle of H2O. The sausage, I waited in a short line and purchased by myself. The hotdog was a treat from a couple of my officers.

Speaking of those police officers, I couldn’t have asked for a better crew. I had the same group of cops under me on both days. Only one of the officers had any time on the job, the others were all rookies.

All of the officers comported themselves with professionalism. They basically held to my directives: “I need to see you around regularly, keep an eye out for problems while enjoying the event and the people, and don’t do anything to get yourselves on TV.” I was ribbed by a couple of them on that last one after my salute appearance.

While visiting with that Rocky statue, waiting on my first-day hot sausage, I ran into an old classmate from my Police Academy class 289. Newly minted Philly PD Deputy Commissioner Dennis Wilson has always been a great guy, and hasn’t let the new rank change him at all. My only problem with him? The man looks like he hasn’t aged a day in 27 years.

People in the area where I was assigned from outside of the Philadelphia Police Department were extremely cooperative and friendly. Fire Department paramedics on their Segways were everywhere. The event security personnel, federal law enforcement, the NFL staff, and employees of the various networks providing TV coverage all worked together well.

One member of that NFL staff gets particular thanks from me, and I’m sorry that I never got his name. The situation went like this: on Thursday night, after taking a few opportunities to capture some of the pageantry by taking a few pictures and videos, my cellphone died.

Still having a few hours to go on the work detail, I realized that I had left my portable charger back in my car. Overhearing me mention this in a conversation with my officers, a member of the NFL Network technical crew offered to charge my phone. I took him up on the offer, and a half hour later had a half-charge and was back in business.

Near the end of Thursday night’s first round, I got to meet and speak for a few minutes with the woman who was in charge of the actual arena structure. If you didn’t get to see it in person or on TV, the NFL Draft arena was an amazing piece of temporary architecture.

She said that her company goes from town to town, event to event, pulling off similar amazing feats. For instance, this summer they will be handling the huge Lollapalooza concert in Chicago in August. Her folks did a phenomenal job putting that structure in place.

On Friday, newly-promoted Philly PD Deputy Commissioner Joe Sullivan stopped through my area and mentioned that “we haven’t even had to handle a fight.” We both knocked wood, hoping it would stay that way.

Stay that way it would. No fights, no major disputes. I saw one protest sign the entire time (“Investigate Pizzagate – it’s real!“) which garnered zero attention for the guy trying hard to get some. He left the front after about two minutes and no crowd response.

There were a couple of lost children, ultimately returned to their families. And there was one other incident that was handled by myself and my crew with the help of Chief Inspector Frank Vanore and the PPD Bomb Squad.

A non-thinking member of the stage crew had left a backpack leaning unattended against a tree for a length of time near a side stage entrance. The bag was reported to us as a concern by the NFL Network folks.

This was ultimately great work performed by the brave Bomb Squaders, who thankfully got to deal with a bag full of clothing this time. After the 2013 Boston Marathon attack, unattended backpacks are a no-no at major public events, people. Something to keep in mind.

It was this spirit of cooperation and friendship that was on display everywhere you looked this week which truly stood out. Whether it was with internal PPD ranks, or with security staff.

Especially with the crowds. Philly fans were outstanding, even from or towards rival Cowboys and Giants fans. A couple of Baltimore Ravens cheerleaders humored me with the above photo. Everyone was in it together, and in it for the right reasons – a peaceful good time.

Congratulations to everyone associated with bringing this showcase to Philly, and with organizing, managing, and running the event itself. The 2017 NFL Draft was a major success story, one of the nicest events that I’ve had the pleasure to work over a law enforcement career that is now in the middle of its 28th and final year.