The Philadelphia Phillies will once again take an evening to celebrate the importance of teachers this coming season.

On Friday, May 13th, 2016 during a game against the Cincinnati Reds, the Phils will honor 10 local teachers at Citizens Bank Park on Teacher Appreciation Night.
This will be the 16th annual celebration of the educational profession by the Phillies.
Fans are being encouraged to nominate their own personal favorite teachers between now and Friday, April 1st, 2016.
Students, parents, former students, and peers are asked to submit teachers who have impacted their lives in the past and/or present.
The Phillies will select 10 “All-Stars” from among all nominees received to be specially honored on the field prior to the game that night.
The club will also honor a further 10 “Honorable Mention” nominees along with the “All-Stars” at a pregame tent party. All 20 will then enjoy the game that night as guests of the club.
Each year there is also a special feature at this event in which a current Phillies player honors a teacher from their own past.
Recent honorees have been

former teachers of such Phillies greats as Ryan Howard and Jamie Moyer, the latter of whom grew up and went to school in Souderton, Pennsylvania, about 35 miles north of the city, and also played ball at and graduated from Saint Joseph’s University in Philly.

This effort by the Phillies has special significance for us here at the TBOH site, as three of the staff members are actually teachers.
In fact, the newest staff writer, Mike Azzalina, was an Honorable Mention honoree back in 2014 in the Phillies program.
The “cover girl” for this story, Kristin Zinicola, was honored as an All-Star back in 2013 for her work at the Caley Elementary School in Upper Merion, Pa.
View image on Twitter 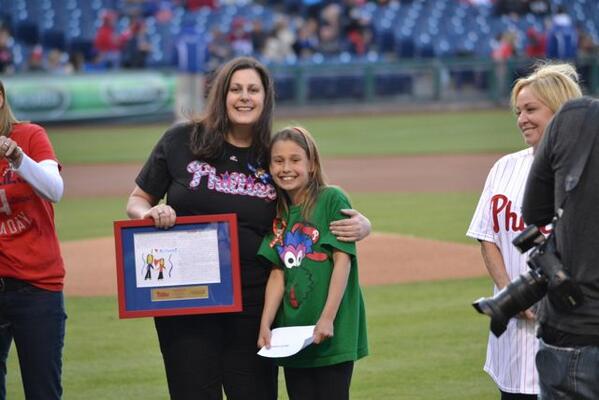 Whether your favorite teacher is nominated or honored, all educators and their families will receive an $8 discount that night on any ticket priced at $47 and under. The educator/teacher will need to supply some type of school identification to receive the discount.
Group tickets are also available for groups of 25 or more. Interested teachers, educators, and their families can purchase these discounted tickets at this link: Teacher Appreciation Night discount tickets.
Last year, six Pennsylvania teachers and four from New Jersey, four men and six women, were acknowledged as the 2015 Teacher All-Stars.
That group included Tammy Cantagallo of John M. Patterson School and Natalie Tidmarsh of The Overbrook School for the Blind, both located in Philadelphia. The team also recognized 20 “Honorable Mention” teachers a year ago.
So submit your nominations now at this link: 2016 Philadelphia Phillies Teacher All-Stars Contest. They have been blessed with a gift, discovered that gift, and made the choice to use it in order to help educate future generations.
The team, and we as fans, now have a chance to show our appreciation for their exceptional use of those gifts. Take the time in the coming days and weeks to fill out a nomination.