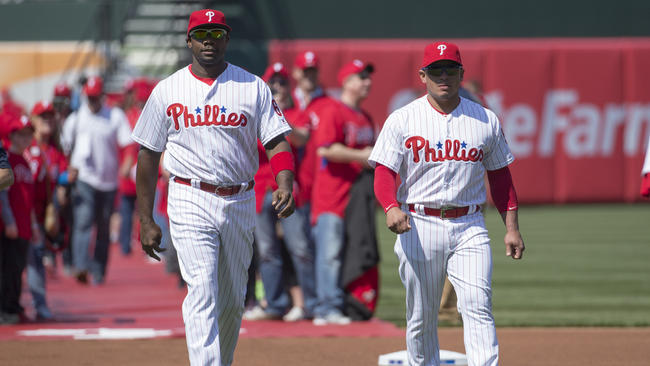 They are the “Core Five” of the Philadelphia Phillies run of five consecutive division titles, and the 2008 World Series championship: Ryan Howard, Chase Utley, Jimmy Rollins, Carlos Ruiz, and Cole Hamels.
With this evening’s revelations of a deal that will send Utley home to southern California for a reunion with JRoll in the LA Dodgers infield, and the recent trade of that 2008 World Series MVP Cole Hamels to Texas, only Howard and Ruiz remain from those great Phillies teams.
Where have they gone, those beloved Fightin’ Phils who dispatched the Tampa Bay Rays in that cold, wet week back at the end of October in ’08?
The only key player from that glorious season to actually go out on top was reserve outfielder Geoff Jenkins, whose booming double re-started the decisive Game 5 after two days of rain. Jenkins retired following that Series victory. He was the only one.
Backup infielder Eric Bruntlett returned with the Phils for 2009, and then retired. The “33-year old rookie”, Chris Coste, returned for ’09, moved on to Houston, and finished with his final MLB appearances there in that 2009 campaign.
Slugging pinch-hitter Matt Stairs, whose key homer “deep into the night” in LA in the pivotal Game 4 of the 2008 NLCS broke the Dodgers backs that year is now a Phillies broadcaster. He also returned for 2009, and finished up his career playing 2010 with San Diego and 2011 with Washington.
Relievers Scott Eyre and Clay Condrey, part of the famed bullpen “Bridge to Lidge”, came back for one final year in 2009 and then retired. Chad Durbin, another piece of the “Bridge”, returned to the Phils in ’09, left for two years, and returned for his final MLB season again in a Phillies uniform in 2013.
J.C. Romero, the key lefty setup man for the champs, stayed with the Phils into the 2011 season. He had shots with a couple of teams before finishing 2011 with the Rockies, pitched in 2012 with the Cardinals and Orioles, and then hung up his cleats.
As for Brad Lidge, “Lights Out” himself stayed with the Phillies through the record-breaking 2011 season. He played one final year in Washington before retiring following the 2012 season.

Jamie Moyer, who was a Phillies broadcaster during the 2014 season, was with the Phils through 2010, had TJ surgery, made a comeback with Rockies in 2012 at age 49, bounced through a couple other orgs that summer, and then finally hung ’em up.
Pedro Feliz remained the Phils’ 3rd baseman through the 2009 World Series, then spent one more big league season split between Houston and Saint Louis before retiring.
The starting outfield scattered at different times. Left fielder Pat Burrell just last month became the first, and certainly far from the last, to be enshrined on the team’s Wall of Fame.
Burrell signed as a free agent with the Rays after beating them in the World Series. He then won another Series crown with the Giants in 2010, stayed by the Bay in 2011, and then retired.
Jayson Werth cashed in his title and back-to-back Phillies World Series appearances for a $122-million dollar, 7-year deal that has helped make the Washington Nationals relevant. Injury prone in recent years, he is back trying to help the Nats get back to the playoffs at age 36.
The Flyin’ Hawaiian, Shane Victorino, was dealt away to the Dodgers at the 2012 trade deadline. He signed as a free agent with the Boston Red Sox, and won another World Series in Boston in the 2013 season. The Bosox dealt him to the Angels this season, and he is there now at age 34.
Brett Myers was a Phillie from 2002-09. He then had two mostly successful seasons as a starter and one as a closer with the Houston Astros, finished 2012 in the White Sox pen, before finishing his MLB career at just age 32 by making a handful of appearances with the 2013 Cleveland Indians. He is now launching a country singing career, of all things.
Kyle Kendrick was a regular member of the 2008 rotation, making 30 starts, but he was shut out of the 2008 postseason entirely. He remained with the Phillies right through last season, and now is with the Colorado Rockies, where at age 30 he has been just awful.
Phillies fans who saw it will long remember Joe Blanton‘s World Series homerun. Blanton was with the club into the 2012 season, was traded to the Dodgers that summer, and then signed for 2013 with the Angels, for whom he was entirely ineffective that year.
Out of MLB in 2014, Blanton fought his way back this season. He was solid out of the Royals pen, and has now resurfaced with Pittsburgh, trying to help the Pirates back to the postseason at age 34.
You know the rest of the stories, those of that “Core Five”: Jimmy dealt away back in December to the Dodgers, Cole a few weeks ago to the Rangers, and now Chase also out to wear Dodger blue.

That leaves ‘Chooch’ and ‘The Big Piece’ with only each other, the only two Phillies players who stormed the mound after Lidge struck out Eric Hinske.
Ruiz was the first to reach his pitcher, with the two men embracing on their knees. Howard was next, plowing them like an NFL linebacker before the trio was buried under a mob of celebratory teammates.
Howard is now the longest-tenured professional athlete in Philadelphia. He was first called up in September of 2004, and has become the 2nd greatest homerun hitter in Phillies history, winning an NL MVP and Rookie of the Year Award, and an NLCS MVP as well. He has a $25 million contract guarantee for the 2016 season, and then a likely $10 million buyout.
Ruiz got his call in May of 2006, becoming the starting catcher by the following season. He was a 2012 NL All-Star, and received MVP votes every year between 2010-12, handling one of the greatest groups of pitchers in the history of the game during the record-setting 2011 campaign. He has an $8.5 million contract guarantee for the 2016 season, and then a half-mill buyout.
“And then there were two.” It was the statement made by Howard in the locker room following tonight’s victory over the Toronto Blue Jays, as the Utley deal was all but announced as final.
Those two, Howard and Ruiz, may be back for one more go around in 2016. Or one or the other, or both, could simply be released this off-season, with the team eating their contracts. But their time is coming, as Phillies fans will reach the inevitable day where all of the 2008 heroes will be gone, as Chase Utley is now gone.