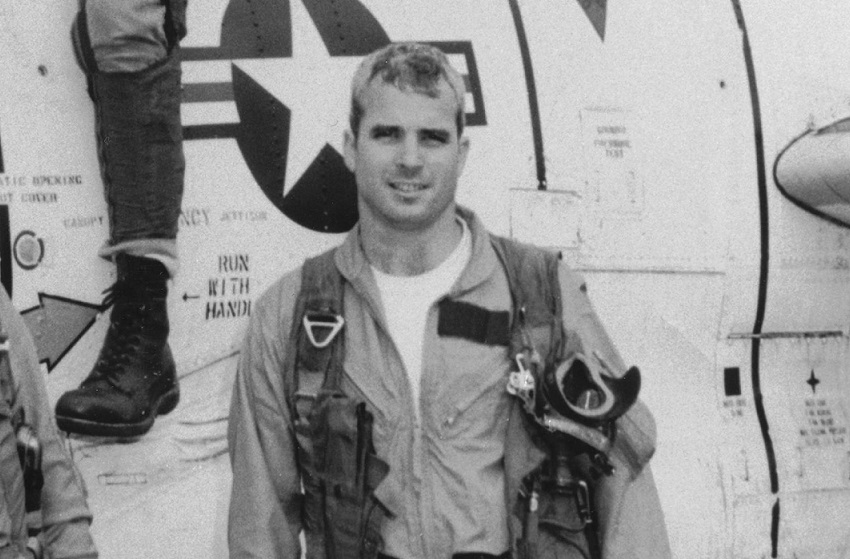 There is no way on God’s green Earth that I am going to try to compare my life and it’s trials to that of John McCain and the trials and sacrifices that he endured in Vietnam.

But I have some small appreciation for what it is like to have to overcome difficulties thrown at you by both life and your own bad decisions and attitudes, including some similar to what John McCain has had to overcome.

Last night at the Republican National Convention, a real American hero stepped to the podium to humbly and deservedly accept his Party’s nomination to be it’s candidate for the office of President of the United States.

In doing so, McCain spoke as an everyman whose heroism was not always completely altruistic. He said that on the day he was shot down over North Vietnam, and subsequently became a prisoner of war, he prepared in the Gulf of Tonkin for that mission “for my own pleasure; my own pride. I didn’t think there was a cause more important than me.”

At that point in his life, McCain was a 31-year old who had graduated from the U.S. Naval Academy nearly a decade earlier. His father and grandfather had each achieved the status of four-star Admiral in the Navy. McCain himself had already cemented a reputation as an independent-thinking maverick who admitted that he thought the “civilian commanders were complete idiots who didn’t have the least notion of what it took to win the war.”

McCain’s pride extended into his personal life, where he had the reputation in his 20’s as a partying man. That continued even after marrying a Philly model named Carol Shepp, adopting her two small children, and having another with her.

The year 1967 would prove a turning point in McCain’s life. In late July, he barely survived a disastrous and deadly fire on board the air craft carrier U.S.S. Forrestal in which he was severely injured while trying to rescue a fellow pilot.

McCain would recover, and three months later, on October 26th, 1967, took off for his 23rd bombing mission over Hanoi. This one would not end as successfully as had the previous 22 missions.

McCain’s plane was shot down, and he parachuted directly into a mob. They beat him and took him captive, beginning a 6-year period as a POW served at the notorious ‘Hanoi Hilton’.

He was close to death a number of times, surviving only thanks to the efforts of his fellow captives and the grace of God. When it was discovered that his father was the head of U.S. Naval operations, his North Vietnamese captors offered to release him.

McCain realized that this was only as a propaganda ploy to demoralize his fellow prisoners and gain points with the American media. The United States military had developed among it’s members a tradition of ‘first-in, first-out’ regarding POW’s, and McCain was not about to go home ahead of many others who had been held captive longer than himself.

It would not be until 1973 that McCain would finally be released. He returned home a physically beaten and emotionally drained man. But he was now also one who had gained an overwhelming love and respect for his country during his captivity. McCain had truly begun to appreciate the things that his country represented and offered, things that he had taken for granted during his younger days of freedom.

On his return home, he was unable to fully integrate back into his family. He embarked on a series of extra-marital affairs that drove he and Carol, who had herself been seriously injured in an auto accident during his captivity, apart from one another.

Professionally, McCain fought his way back to full flight status, and eventually became the Navy’s liason to the U.S. Senate, which he credits as beginning his life in politics.

In 1979 he met his future and current wife, Cindy Lou Hensley, a teacher from Arizona, and the two fell in love. McCain then finally sought a formal divorce from Carol, and after a settlement the two remained on good terms, allowing John and Cindy to marry in May of 1980.

McCain retired from the Navy in 1981 and decided to run for Congress, winning election. He became what has been described as a ‘foot soldier in the Reagan Revolution’ of the 1980’s, bringing conservative ideals and patriotism back into vogue.

In 1986, McCain ran for a Senate seat in his adopted state and his wife’s lifelong home of Arizona, winning and going on to serve his state right up until today. During his two and a half decades in politics, John and Cindy McCain had three chidren together and adopted a fourth.

During his relationship with Cindy and his post-Navy career, he fully overcame the selfish desires and habits of his youth. He fully healed the relationship with the children of his first marriage as well, to the point where his entire family, including all of his children, is now integrated and close.

In politics, McCain has retained the maverick reputation of his youth. He has frequently battled those in his own party over serious issues, and his record is far more bipartisan than many other conservatives or liberals on either side of the aisle.

McCain continued this independent spirit with the selection of Alaska governor Sarah Palin as his running mate. Palin is a woman whose own maverick and independent spirit and political reputation matches McCain’s. She is also far more attractive to the Republican Party base as a woman even more conservative than McCain.

A military veteran who sacrificed his body for his country. A political servant who battled through two decades in the House and Senate building consensus while remaining largely true to his conservative roots.

A man who grew and learned as a human being, overcame personal difficulties sometimes of his own making, and emerged as a staunch family values man. A maverick who bucked his own party at times, and who had the courage to nominate the first woman to the top ticket of the Republican Party.

John McCain wrapped up his emotional acceptance speech by saying the following:

“I’m going to fight for my cause every day as your President. I’m going to fight to make sure every American has every reason to thank God, as I thank Him: that I’m an American, a proud citizen of the greatest country on earth, and with hard work, strong faith and a little courage, great things are always within our reach. Fight with me. Fight with me.”

John McCain was not my first choice back in primary season to lead my Party, but there is no doubt now that I am fully prepared to happily and proudly fight with and for this real American hero. Just as importantly, I am prepared to give him my vote to become the next President of the United States of America.